As part of our continued work within the community, we have been the main sponsor for Buxton Junior Football Club u14’s, who competed in the Matlock Mercury Trophy Final.

Taking place at Alfreton Town Football Club, the fixture on Sunday 7th May was between our boys from Buxton and Pilsley Community Football Club. After a sportingly contested game of football, Buxton came out on top, winning 2:1 and lifting the trophy they had been working so hard towards winning.

Aside from giving youngsters the opportunity to play the beautiful game in a competitive, tournament environment, the final was also raising money and awareness for Chernobyl Children Life Line Charity. To find out more about the charity, click here.

Sponsoring Buxton Junior Football Club has been fantastic, and we’re thrilled for the boys, their parents and the coaching staff that they have won the trophy. We hope that our partnership will continue with such success in the future.

If you live in or around Buxton, and need professional legal advice, visit our offices on Terrace Road in Buxton, or give them a ring on 01298 930111.

We’d like to say a huge well done to the boys for their commitment to the team this season and let’s hope for more of the same next season! 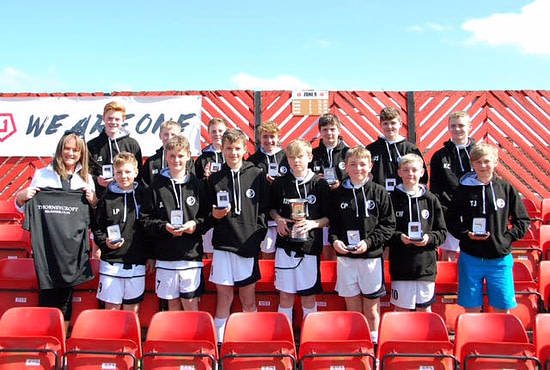